The five steps of LOCAL health plans from Dave Chase 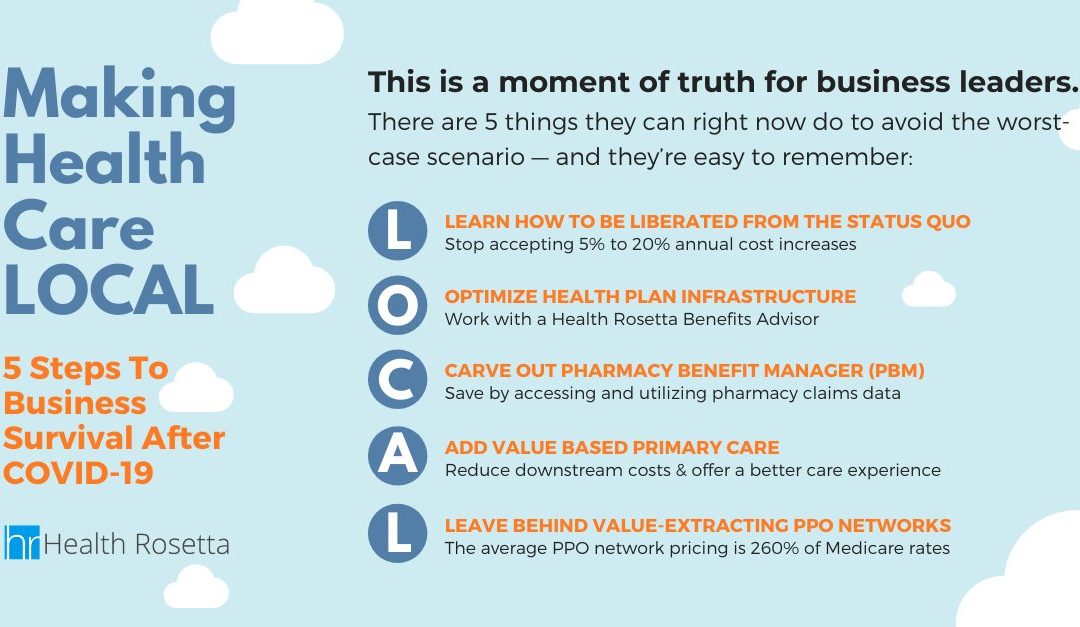 In this chapter, I detail the five straightforward steps to high-performance plans that spell out “LOCAL” because high-performance plans realize that health starts at home with mom and dad and then extends to the neighborhood and community. Too many health plans act as though health started in a pill or a hospital. For those concerned about introducing change to employees, it’s worth noting that four of the five steps are either invisible to the member or only a clear, new positive element to their plan.

Typically, people don’t think of health care when they think about “Shop Local” programs. Yet, what is more local than an interaction between a patient and a clinician. Despite this, a county such as the one I live in with 250,000 people spends over $2.5 billion annually on health care (across all ages). At least $1 billion of that is extracted out of our local economy as a “tax” to Wall Street (via their money-handling mega carriers, PBMs and health systems). Imagine if just 10% of that extracted money was repatriated back into our local economy every year to fund what drives well-being such as better pay, education, safe neighborhoods, social services, public health, clean air/water and more. This chapter (PDF) and the rest of the book explain how this is being put into action. Will you join these forward-looking community leaders? At Health Rosetta we empower community-owned health plans: high quality, trustworthy, local, affordable care — that you thought had disappeared forever — from caregivers we know and trust. We free up compassionate, well-trained, community-based caregivers to rediscover love in medicine so they can do what they have always been called to do: serve their patients not just in disease, but toward their fullest health. A trusted and sacred caregiver-patient bond is built through transparency and openness that equips and empowers patients wherever they can best achieve their unique health goals — at home or any setting best optimizing their health and well-being. By avoiding the 50% wasted healthcare spending, we can ensure our caregivers have the independence and resources to address the psychosocial and medical issues their patients face in human-centered health plans that restore health, hope and well-being in our communities.